NTS ( National Trust for Scotland ) organised an event for The Highland Region Archaeology fortnight at our local Strome Castle, Wednesday 12th October. I was called in at the last minute at do some Pictish Facepainting. I don’t have any pictures of the resultant little Picts, as of course thrusting camera’s in children’s faces is a little rude. Strome Castle isn’t a Pictish site, but we certainly had Picts in the area a few hundred years before, as evidenced by the carved stone at Applecross. 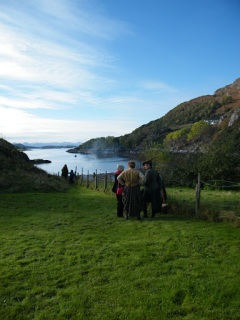 I wasn’t sure what to expect or if many folks would turn up, I did expect it to be cold and wet, so layered up accordingly. Instead it was a beautiful warm sunny autumnal day, lots of people turned up, local and visitors. It was quite gorgeous to sit in the sunshine with the smell of the wood smoke, chatting to folks, practicing my terrible Gaelic & enthusing about our local history. 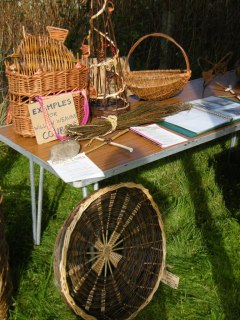 Monique Bervoets from Sallachy who was over with her willow weaving, helped people make willow ornaments.

Margaret Beaton came over from Applecross to let people do some spinning. 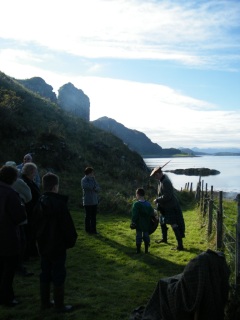 Ossian from Strathcarron, entertained folks when explaining some sword fighting techniques and let people try on a plaid. 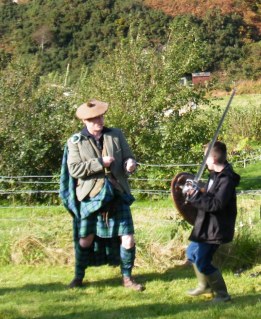 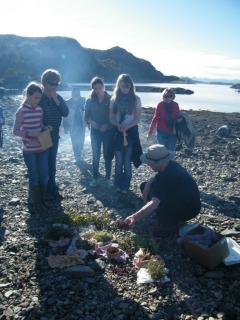 Event organiser Gavin Skipper from NTS was doing dyeing on the shore with berries and local plants. 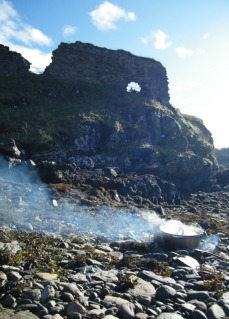 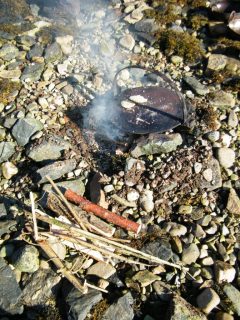 oatcakes baking on the shore, folks got to churn their own butter and eat them with elderberries. Yum!

conservationist Barbara from Lochcarron who works for NTS showed people how to make oatcakes and historical style food.

The event culminated in the telling of the battle of Strome castle story, by Local Historian Helen Murchison. People divided into the two clans of the MacDonalds and the MacKenzies, wearing Tartan swatches donated by the Lochcarron Weavers – Ossian and Gordon then  fought the final battle on their behalf.

The event was really enjoyable and very inspiring how much local knowledge, skills, and enthusiasm there is.  I think we don’t need lots of funding to make things start to happen around here, just some positivity and people working together!

This entry was posted on October 13, 2011 by balnacra in Blog and tagged celt, event, picts, scottish, scottish castle, storytelling.