I feel my blogs are becoming just a blurr of blurry photos and inarticulate keyboard thumpings, i was here, i did stuff… never time to process one event before the next hits!

Meanwhile, this weekend myself and Rich headed off to Leeds Thought Bubble sequential arts festival ( thats a grown up work for comics and cool stuff ). Two days travelling each way for us! urg!  We had our own convention organising hats on as well as creator hats on. Rich does a few comics that were on sale there, i had drawn a strip appearing in a comic called Something Wicked ( by FutureQuake pubs ). We both had worked on strips for a book being launched ‘ Tales of the Fallen ‘ part of Barry Nugents Unseen Shadows universe ( a trans media project ) .

We’d volunteered to help the organisers. It was brilliant fun! there is a great atmosphere there and masses of people came for the weekend event which was a cumilation of a weeks events, workshops, talks, conference, competition, film screenings and happenings. We were on guest liaison detail and queue wrangling with the loads of other brilliant friendly and professional volunteers in our coveted red t-shirts.

Manga cosplayers were out in force, some great costumes, and some…brave …costumes.

2000ad themed canvases were getting painted by a selection of artists throughout the weekend. 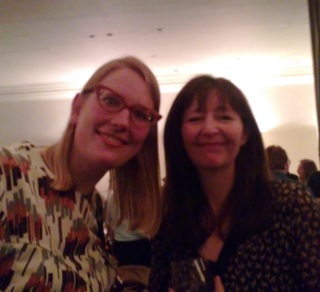 Friday night there was a pre con reception, which was a great chance to get together & meet collaborators old and new. Above is Sarah McIntyre and Gillian Rogerson. They have a fabby new book out ‘You can’t scare a princess’ and Sarah’s children activity area was pirate themed this year.

Sarah was kind enough to take & send us a rare exclusive photograph of myself and Richmond together captured in the wild.
Saturday night at the after party we got grumpy that the music was too loud to allow conversation, but just prior to leaving thought we might as well join in, so disco’d the night away with the young folks. It was great fun! 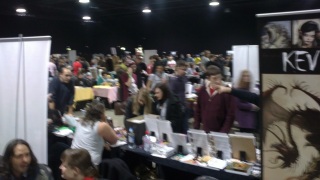 blurry pic across one of the two halls.

There was a panel to launch our anthology book ‘ Tales of the Fallen’- Rich hosted it, on the right, Barry Nugent in the middle with the hat on is the editor/ original creator/ boss , to his left writer Cy Dethan ( who i coloured ‘ Slaughtermans Creed’ last year with )

Left writer Dan Thomson who wrote the story ‘ band of Butchers’ that i coloured, Martin Conoghan ( whom i have drawn a strip with for ‘ Spirit of Hope’ , and writer Peter Pogers. sat next to me were artists Steve Penfold and Rob Carey ( who very very kindly gave me a couple of brilliant inked pages that i’d coloured for the book ). What a great team and happy Unseen Shadows family!

Its always weird seeing your work projected big. here is one of the pages from ‘Band of Butchers’ that Rob drew and I coloured ( of course the photo bleaches it out ) There has been some great feedback from the panel and great sales this weekend, apparently the team enthusiasm and passion for the project comes across. yay!

I was on roving mike duties for the ‘women in comics’ panel. It was a rather positive up beat discussion, prehaps the days of exclusion can slowly start to be behind us? although there are still plenty of publications which are boys only cliques… we’ll work on it !  Some of speakers on this panel were brilliantly inspiring! 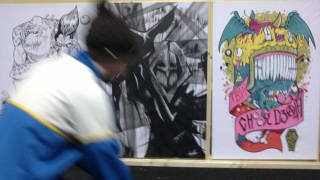 The hall clearing away was exhausting! but then we were done- a billion chairs stacked, tables folded, boxes lugged, stressed exhibitors packed up, rubbish cleared! hurrah for a blurry Red army of helpers, with the lovely Lisa organiser (in denim).Thanks to all for making it so much fun.
Hopefully some snowed in winters evening i’ll get time to back track and write more about some of the projects people are doing, great discussions and actual interesting stuff.
Must dash, i have an exhibition to put up now……

This entry was posted on November 23, 2011 by balnacra in Blog and tagged comic, comic convention, leeds thought bubble, volunteer.