A spring clean for the May queen

This spring has been a headlong rush. As May arrives it starts to feel like I’m nearing the metaphorical summit, where at last It may become apparent what the summer view will be. Does that make sense? There are a few big changes that have been cooking, some have crept up, others I’m still struggling to decide which way to jump, where am i going, what is new, what next? what to commit to & what to drop ? there is of course the eternal battle to drop more, to try and finally wrestle that work / life balance into submission. It seems to have been a year of running & wondering what happens next. I am certainly getting more R&R time, weekends have now become Quality time rather than an extension of the working schedule. However i have to knock my pan in week days & nights to make up for it.  Most of the blogged photographs are from the East coast where there is little opportunity for me to slide into work, which is great- lots of SPACE.

The iGallery is now in its 6th week, it has been going really well. We’ve settled into a bit of a routine. having artwork selling has got me painting & printing up cards etc again which is great. It is also enjoyable spending one day a week in the public domain, while shop visitors and locals popping in for a chat mean not much work gets done, it is lovely having that interaction and meeting so many friendly visitors to the area, seeing teh familiar through fresh eyes, seeing their interest at what we achieving as a local community charity.  I had been facilitating this community gallery on a voluntary basis, but have slid now into a paid post which started this week. This gives me a much better chance of getting on top of the massive project to do list! There are also two helpers starting next week on a job share, its great to see this charity starting to generate employment, revenue and building up within the community in different ways.  It is a lot of work though- sometimes like herding cats ! 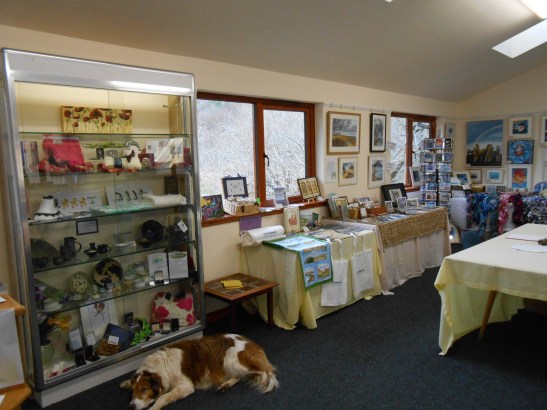 Bruno loves all the attention from the public but does get bored after a long day! Luckily the majority of the public are dog lovers.

There is also a lot going on with the Fire & Rescue service, we are now no longer Highlands and Islands Fire & Rescue service, but part of the Scottish service since April 1st. In effect this has meant a sudden increase in training courses, which is great- but quite a commitment. I also have an interview next week, for a post I’ve been in for 2.5 years.  I think if i won the lottery i’d leave this job… or would i ? I don’t know, we’ll see how it pans out.. for now.

enough introspection! behold ^  this is a metal thingy that goes on the back of trawler boats, nice welding! 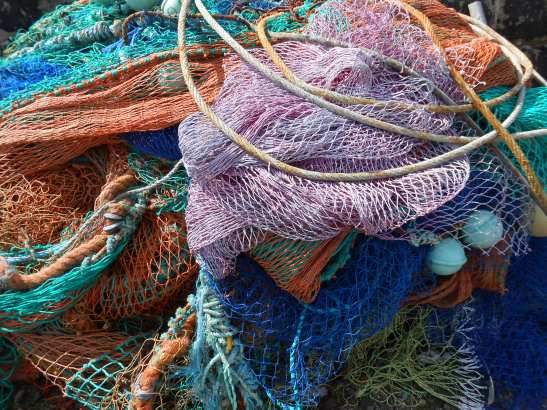 oh tangled nets! that’s what this last week was like, i was desperately working away prioritising & making sure that things were prepared for ten days hence, task triage, but i still had to cancel the proposed trip down to central belt to do a talk. I hate renegading on commitments, its pure stress, But it just couldn’t be shoe horned in between everything else. I think people without dogs don’t realise the commitment, and how dog sitting can be a problem. I think folks in cities don’t realise what it is like trying to organise things where there is no public transport, the banks only open a couple of days a week, it takes an hour or two to get anywhere, the wages are a third of anywhere else and there are no shops etc etc etc . So i dropped that trip, and gained myself back 2.5 days, on leave, not on call… surreal…very useful!

Here are some more sunny east coast photos. I’m making a time lapse film of the harbour when i’m there… it may be a while yet! 10 months and its only about 40 seconds long!

climbing the seawall at high tide

Burghead is picturesque… except this bizarre carbuncle!

rapa nui, with hat, by Andrew

Andrew managed to catch a photo of the needle fairy man

here is the tattoo work that i got done this week, designs etc in this blog here. Another good reason for staying on Leave this week while this heals, i wouldn’t fancy hauling a hose over this shoulder or donning a Breathing Apperatus kit just now.. ouch.

and i’ve  been building today, part of this moving forwards into the new, has been slowly working my way around the house. clearing space, sorting tools, rearranging the spaces, trying to jetison other peoples things that are left here, de cluttering, de junking, selling art & craft bits, putting decent lighting in my studio. I don’t know where it’s going, but its going somewhere. Hopefully somewhere creative…. SPACE, the final unobtainable frontier! 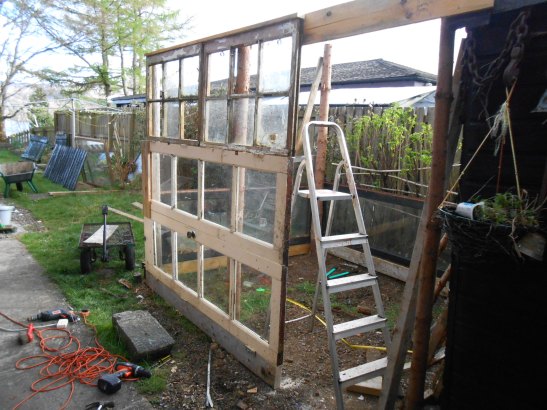 this is going to be a greenhouse, for free!  I have been saving up wee wood offcuts, i made the posts myself from greenwood and collected lots of windows from very kind people who donated them.  Its taken me ages as i cogitated designs & shapes & worked out jigsaw patterns from random windows. But then it became apparent that the shed needed some reinforcing and the roof re waterproofing, So i’m building them together. My careful designs all went pearshaped when i started digging the neatly measured post holes… and discovered a concrete slab underneath. I managed to chip a little of that away with a metal pole salvaged from a dump. So now its just evolving organically and isn’t really rectangular. I lack all the tools i need really & have run out of nails & screws. But so far so good, it is pretty solid. Can’t wait to get some veggies growing, sort out the sheds , sort out tools, maybe even get some pottery work going again ??

What is this blog about ? Where is it all going ? When will i get some new artwork finished? Sometimes one is too immersed in the now to see the bigger picture, it doesn’t mean that Its not all evolving beautifully though!

One comment on “A spring clean for the May queen”

This entry was posted on May 9, 2013 by balnacra in Blog, Daily Photo and tagged burghead, community, igallery, life, photos, tattoo.