Its not really ‘Work’ though is it? 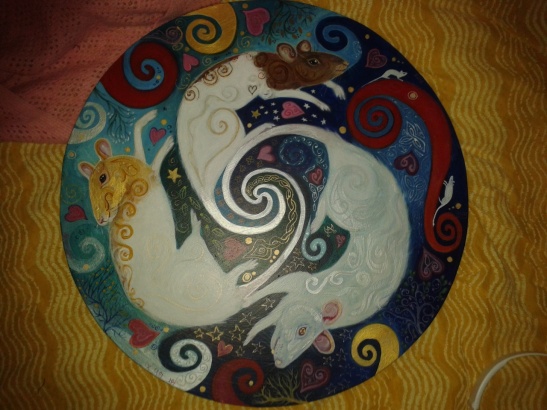 I forgot to share a picture of this painting, This was a top secret Christmas present for my youngest daughter. These are her three rats, they are great! I really enjoyed doing it & hope to do some more like this. It was very unplanned & intuitive, i just got the canvas & started doodling with the paint. Normally I’m all conscious & worried about the target audience, market, gallery, trying to be all Art/Business & grown up. I don’t know why i set myself so many rules and barriers to just painting what i want when i want to. I’ve been fighting too many art demons far too long- the current mission is to untangle them. I have lost sight of fun & creativity somewhere along the line, everyone who’s said i should paint this or that or do it in this style or that style, every unsold painting gathering dust, somehow they’ve just blocked me. I’ve ended up doing any and every job apart from my own ‘business’ of being an artist.
It is as if doing things I enjoy doesn’t feel like work? As if being my own boss feels too indulgent? As if I have given up trying to sell art & crafts & have resigned myself that providing Art as a ‘service’ is the only thing that will work and the actual ‘products’ are unwanted. It it progressive enough? not developed enough? conceptual enough, skilled enough? what direction? too traditional? too representative? too illustrative? too commercial? too… ” Oh yes Vicky well you have your little cartoons to do, don’t you”, “well i think people don’t know what the pictures mean”, ” ooo its a bit too way out for my tastes”, ” oh how kitsch!”. “what you should do is…”

When i have a big achievable list of tasks to do any given day, i select the most boring ones to do first, the spreadsheets, dealing with the hassling e-mails, running around after other people, because that feels like ‘work’.  The end of the day arrives and i’ve run out of time to do MY work, am fed up, tired, hungry & aching. Something has to change, to give, because i’ve ended up too stressed by all those ‘other people’ jobs, especially the voluntary ones where i seem to give the most time & get the most hassle- for zero return.

Sometimes I feel like i’ve been around the houses so many times, been there, set that up, worn and sold the t-shirt, produced it, marketed it, taught others how to do it, done everything! But instead of ploughing forwards, I’ve got sucked into some sideways dead end, so maybe i need to back pedal a little & try some things again, not giving up but going back & doing things better or differently or not letting myself get spread so thin? We are now a month into this new year & I can feel all of last years hassles preparing to pounce again! So NO!  Its time I put my art first, do what I want. Doing what other people have said they wanted me to do hasn’t particularly worked out, following other peoples bright ideas doesn’t go anywhere ” paint more kittens “, ” paint more mountains” , “have you tried pet portraits”, ” You should design tattoos”, ” you should make….” been there done it, not worth it, not fun- spread too thin. what I SHOULD do, is do my art the way I want to, the way it just comes out. But its hard to break these entrenched oppressing patterns!  Expressive Art is a weird gig to try & make a living from, that is for sure ! 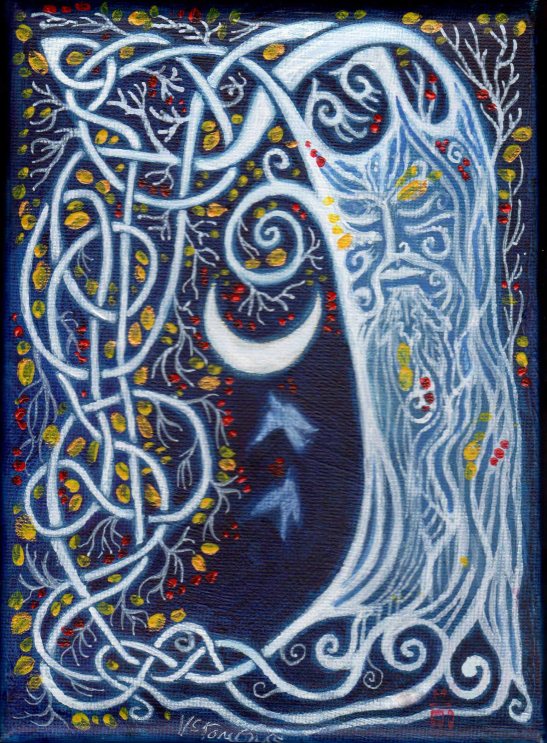 That rant was not what i intended for this blog! but in the spirit of stream of consciousness creativity, I’ll keep it in!

^  Here is a wee small canvas I just finished last week, I’d started a few on the tree/ knotwork theme last year, its taken me a year to finish them. I look forward to clearing the decks & starting a fresh. I will be popping this in the shop.

As part of the breaking the negative work/life patterns i’ve gotten into, I am trying to make sure i do this sort of thing more often…

Even when it is so cold I can’t focus the camera!

Then last week, i took some time to join in with a couple of organisations that had Hired the Treehouse– i deal with bookings and marketing , but was invited along with my community development hat on . They were using the venue for some very focused developmental work, and the venue makes a brilliant place for ‘out of the box’ creative thinking. Thursday I took them a lunch break walk to the River. it was lovely.

On Friday the underneath of the treehouse was converted into a mini film studio to play out some scenarios. Much better than some office! It was a very stimulating couple of days storming ideas & networking with these good people. Gave me a much needed lift, away from my own ‘office’.

Saturday, what a lovely day! lets go walking on Skye we said!…er…by the time we got there, maybe not. Lets go get some food instead! This is where Prometheus & many other films have been filmed btw.

Sunday, bright and breezy. We went exploring at the very low tide, around where the Moine thrust zone has pushed the schist rock into tight contortions. 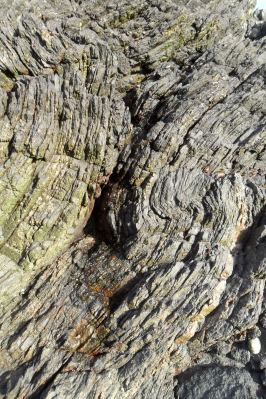 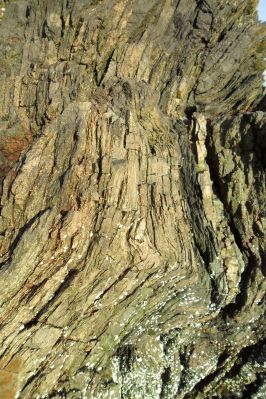 Monday? Perhaps I’ll deal with some of those other people tasks? or Perhaps I’ll log off, switch off, lock the door and hide in the studio?  Here is hoping….

This entry was posted on February 2, 2014 by balnacra in Blog and tagged art, life, painting, treehouse, work/life balance.