Dipping a toe into the waters of crowdfunding

I wrote this for another blog a week or so ago, and thought I’d share it here too.

By now most of us have heard about the successes and failures of crowdfunding through websites such as Kickstarter and Indiegogo, Well I’ve finally taken the plunge and done one to help me fit out my studio. I thought I’d share some of the experience. I’ve worked on a few book anthologies that have been crowdfunded, but it all looked like an awful lot of work for the editor or team in charge. Some small businesses use it as another means of marketing and selling. Desperation finally nudged me towards giving it a go myself.

I have been bungling along making a living from art tutoring, youth work, illustrating, art, design and being a retained Firefighter for many years- working for both myself and various organisations. In 2014 I was hit with tendonitis in my right arm which meant I had to give up Firefighting and the main (but small) steady income of the retainer fee. It’s also meant I couldn’t draw or paint. Denial is a powerful tool, two years on I’m realising this may not be a temporary problem, it is kind of impossible to get my head round not being able to do what was my unique skill and gift. All those years worrying that the art wasn’t good enough, now seem rather silly with hindsight, when I struggle now to write a few sentences with a pen. I also had some other health problems came to light, it has been a long slow process of learning to manage these, and realise I can’t just work flat out, juggling a billion things, driving many miles, skipping sleep and meals like I used to. Very frustrating!

So back in early 2015 I was tutoring pottery in Inverness once or twice a week and was really enjoying it, so started day dreaming about having my own pottery studio to teach and make in again. I had closed my last one back in 2005 and hadn’t really seen myself being in a position to get back to ceramics. So I needed a space to get messy with clay, and the community development company I spend a lot of time volunteering and helping run, had a damp, flooded, but empty barn doing nothing. We’d looked into funding to restore and upgrade this former blacksmiths and then Heritage centre into some sort of useable space, but it was simply too much money to find to restore for a building with no set purpose. It seemed like a good fit for me. So I rented it out, to use as a pop up pottery studio one day a week, allowing me to keep the other tutoring jobs and commitments. I propped shelves up on bricks in case of flooding and just threw together worktops and display out of whatever was to hand. Things quickly snowballed into it being a busy, thriving, popular project. Bit by bit I moved away from the other commitments and threw full time myself into the Pop Up Pottery. 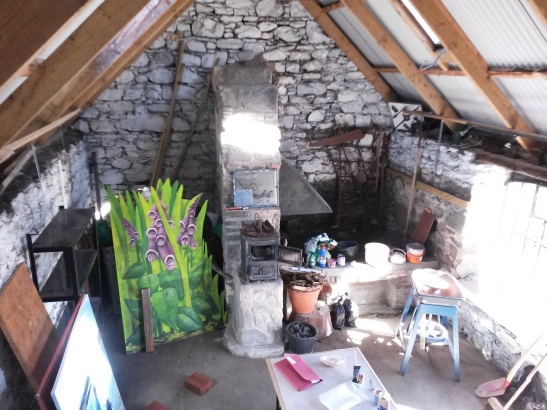 We solved the floods by digging out some drainage, I asked about and sourced tools, equipment and a bigger kiln. The main demand was for people to come along and do group pottery sessions as an activity. I was kept busy finishing, drying, firing, glazing then posting onwards the pots that visitors made. I kept going all winter, my thinking was that I needed to see how workable the space was in winter conditions, I needed the time to overcome some of the problems I was now hitting, and to produce enough pots to stock up galleries and shops in 2016. In short I went full time, and it looks like a viable business on it’s own …BUT

The building needs a new electricity supply, the lighting is terrible, I haven’t been able to see well enough to work or teach after 3pm. The sockets are not safe and it isn’t strong enough to be able to install my new kiln. My existing wee gas kiln is only designed to go to low temperatures and can’t fit larger pieces like vases and plates. It’s like having an oven where the cupcakes at the bottom burn and the ones at the top are uncooked. A big cake would be cooked on one side but not the other.
The building won’t retain any heat I put into it, it is full of holes, the roof leaks and there is no insulation. Sometimes it is colder inside than out!  This hasn’t done my health any good. The frost and ice froze a lot of clay and pots this winter. The clay has been recovered but the pots all suffered from cracking once they’d thawed and were fired. These problems are being looked into by the owners, the community company, any improvements will benefit not just me, but any tenants in the future. Using the building for a crafts workspace seems to be a good fit for this iconic but challenging space. The committee has been working hard trying to source funds to get this work done as soon as possible.

Having been working in the space nearly a year, it has become apparent that there are other improvements are needed- These are what I have set up the crowdfunding campaign for. To run successful classes I need the space ordered, everything labelled and easily found, I need a lot of space to store drying pots. I need a wide range of glazes, slips, clays and tools to explore different techniques beyond those I use in my own work.
January came and went, the pots froze, I froze, I got a flu, storms rolled over ahead, laying in my sick bed panicking about not having enough money to pay the rent, never mind invest in the studio and be ready for the season starting at Easter- it seemed the one thing I could do was try crowd funding. The video was hastily filmed over a couple of evenings when I was so bunged up I could hardly think, never mind make sense to camera!   I tried to film myself throwing pots, normally I demonstrate this in front of people all the time without self-consciousness- but this day I couldn’t throw anything! I used the videos of the bad pots anyway. You know how we all hate the sound of our own voice? Well try spending hours going over and over it editing a video, talk about psychological torment!

I opted for Indiegogo over kickstarter as it means you can keep any amount raised rather than losing it if you don’t make the set target. I offered pottery as ‘perks’ so basically people would be supporting me by buying pottery, gift vouchers or teaching time. I will have to wait until 15 days after the goal date to receive the cash, time is really tight!  Setting up the campaign page was straightforward enough. The video was hosted on youtube. As I pressed the ‘launch’ button, and shared it on social media, the anxiety hit. “What if I have just wasted a couple of days making a video where I just look like a mad woman? £0 is going to look so embarrassing! “.  But as soon as those first contributions came in I found myself overwhelmed by people’s generosity and a bit teary eyed. A lot of people were simply giving donations instead of claiming perks, which I didn’t expect. What am emotional roller coaster!  At the time of writing I am four days in, and have nearly raised half the money, certainly enough to do some of what I need to do, every penny helps really. (  14 days in and the target was reached and I’ve added another goal the fund sits at 110% which is wonderful ! )

So for small creative businesses thinking about crowdfunding, I recommend it. If you have a specific amount of money you need to achieve something measurable, realistic, budgeted and achievable, if you have the time to make, promote and run a campaign for a month or two- go for it!

If you’d like to support mine, you would make me very happy in exchange for some lovely pottery!

This entry was posted on February 17, 2016 by balnacra in Blog and tagged crowdfunding, fundraising, indiegogo, pop up pottery.